The Full Tilt App Rush-Mobile used to be able to run on both Android and iPhone OS, but ever since PokerStars have taken over FullTilt Poker their Mobile app has not made a reappearance although it is in high demand from players.

We would recommend having a look at alternate poker apps in the mean while and we recommend the 888Poker App which is available to Android tablets and phones as well as iPhones and iPads.

Full Tilt was once a dominant force that rivaled PokerStars in matching promotion for promotion, now that PokerStars owns the brand its a bit of a hopeless cause and you are probably better off playing at Stars if you like lots of traffic or even better at 888Poker if you like promos and freerolls.

We certainly hope to expand this section once an App is launched by Full Tilt Poker we will cover a full review and downloads.

Full Tilt seem to have taken a downward trend since their relaunch on the 6th November 2012, despite their current #2 worldwide ranking they are on a daily traffic decline, after all they have dropped their pros and only a few remain they no longer offer an affiliate program and previously earned reward points leave much to be desired.

It seems PokerStars just bought Full-Tilt to eliminate the competition which is pretty sad for online poker, things were far better at the old Full Tilt Poker.

Rush Poker was a huge money earner for the former FullTilt site and the revenue earned made PokerStars launch their own fast poker software in Zoom Poker, nowadays just about every decent poker room has a version of fast fold poker, all of which was first though out by Full Tilt.

Let’s hope some time in the near future that the Full Tilt Poker App is available for download once again for Android and iPhone mobile devices. 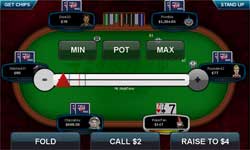 Update March 2014: The FullTilt Poker App seems to have been reopened after not being available for some time, you can download it directly from your iOS or android device from here: Download Full Tilt Poker App